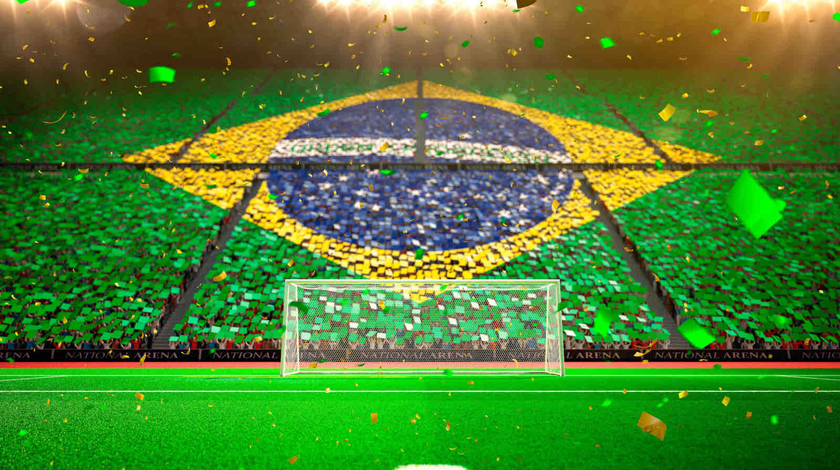 Describing the relationship between sports media and how this is reflected in public perceptions of the relations between Brazil and Argentina, Beatriz Carvalho's master's thesis shows arguments about how football was used as a material representation of diplomacy between the two countries in addition to exploring the role of these narratives to legitimize the pursuit of national interests, historically conflicted until the 1980s.

Starting with the relationship between culture and the interests of a State, the author says that these interests come from a national identity that was built on the basis of various symbols and discourses offering this nation a specific and different world view, attributing an individuality to itself. The importance of an identity both for Brazil and for Argentina and other countries that have gone through decolonization processes serves both to remedy an ontological crisis generated by independence and to define and limit the interests of that same nation in the international system and in the domestic environment (Leão , 2012). Oliver Stuenkel says that “all people develop and sustain their own myth about the founding history of their tribe, nation or civilization. A key element of this myth concerns why it deserves a special place in global history ”(Stuenkel, 2017). In addition, because it was a social built, this same identity does not have a static character, but is subject to variations and changes over time and scenarios (Carvalho, 2012).

For this construction of identity, cultural components and elements are needed to give cohesion to this society created and delimited by the national state (Anderson, 2006). In the case of Brazil and Argentina, the process of creating what it means to be Brazilian or Argentine has used football as a tool in order to create and maintain this national identity by transmitting values or even making sport, as an escape valve to tensions between governments as was the case with the USA versus the USSR in the Olympics Games and Honduras versus El Salvador in the Football War, as Carvalho estates.

In the case of Brazil, the author states that football was used as a nationalist and patriotic tool, always extolling Brazilian exceptionalism in sport and this is shown in the perceptions that Brazil had of Argentina and Argentine football. Heirs of colonial disputes between Spain and Portugal, the two largest nations in the Southern Cone only started a more sensitive process of cooperation, but full of rivalries, after the Paraguayan War that only really ended in the mid-1980s (Doratioto, 2012). This is proven by the approximation of the two nations in the period of their re-democratization, since their antagonisms were radicalized in their periods of military governments whose geopolitical views were similar and divergent (Pinheiro, 2004).

It should be said that the media showed these rivalries more or less explicitly, creating or reflecting a public towards the relations of two nations. The author also shows how the speeches change over the years and how they reflect, not always at the same pace and pattern, the Brazilian-Argentine relations. The author concludes that, despite the tones of rivalry portrayed in the media at the 1982 World Cup,during the 1986 World Cup, just four years after the previous one, there are no signs of antagonism between the two countries portrayed in the press. However, in the 2002 World Cup, despite the great rapprochement between the two nations in both economic and political fields catalyzed by MERCOSUR, the media tones about the Argentine team were offensive, largely due to the great economic crisis that the neighboring country was suffering. It is also worth mentioning that at the 1982 World Cup, despite Brazilian support for Argentina in the Malvinas War (a diplomatic movement called as imperfect neutrality), there is an unfavorable tone to Argentine people by the Brazilian media.

Another point shown by the author was the importance that the flow of information has become an important actor in international relations. Mass sharing of texts, images and opinions ends up shaping the thought forms of those who consume this type of information, becoming perpetuators of speeches (Albert et al., 2008; Said, 2012). In this way, governments can make use of certain information that favors their interests in order to form a natioanl mentality and thus produce a public opinion that is in agreement with the government actions. This is even more important in democracies when taking into account the notion of republican power developed by Hannah Arednt in which the logic that power comes from the collectivity of people is developed, and then, the people being both the source and the legitimizer of power ( Arendt, 1972).

Therefore, Carvalho comes to the conclusion that there is a follow-up more or less in sync regarding the opinions portrayed by the press and the mass media with the relations and levels of friendship between the two countries. The justification she finds to explain this imperfection relation between speeches and diplomacy is given by the crystallization of a discourse of rivalry and a historical heritage in which rivalry weighs more than approximation. It’s worth noting that the aproximation between the two countries was a quite fast process and done by the political elites, which has not brought the public opinion to this integration process. This thesis also appropriates the idea that the great flow of information made possible by the new media can be used both as a tool for forming public opinion and used in order to reproduce certain discourses and understanding. In addition, she states that football and any political campaign based on this sport from the two nations can collaborate to build mutual perception between Brazil and Argentina, reflecting, but not always at the same pace,  the dynamics of foreign policy.

Anderson, B. (2006). Imagined communities: Reflections on the origin and spread of nationalism. Verso books.